The loud screams from Super Junior fans are filling the stadium every time Super Junior member are out for performance whether it is in a group of their individual performance. Their performances really got her eyes captivated. They are a totally awesome group.

She looked around the stadium, impressive to look at the crowd numbers that filled the stadium. Leeteuk is definitely somebody with lots of impact. She told to herself.

Ryeowook just finish his individual performance. Suddenly the stadium lights were fully off leaving the Super Junior Fans’ light-stick to light up the place beautifully. A spotlight is pointed to a man with a saxophone.

Sora’s jaw almost drop when she realize that the man is actually her virtual husband. She just couldn’t believe the talent that he had as she knows it’s not easy to play saxophone as it required deep breath.

“He always been hardworking” She said to her staff who sits beside her when Leeteuk started to play his piano cover of Secret OST for his second performance. Again, Sora got captivated by his charms who keep trying to do his best as he promised during their first time meeting.

The third song played, it’s her favorite song “She” covered by Leeteuk. His voice and the piano synchronized and harmonized beautifully. “There’s nothing that he can do” She thought to herself. Somehow she’s been feeling if compare to him, she is nothing. She looked at the amazing performance performed by Leeteuk who’s currently up in the sky throwing roses to his fans. 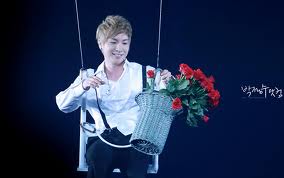 Leeteuk look at Sora who just a few meters away from him. His heart started to beat harder. “I need to do this well” He sigh, trying to let go of his nervousness. It is his idea to do this big scale of event and he knows it’s going to impact both of them real big. He’s checking the thing in his pocket while heading towards Sora.

Sora got surprised when suddenly a spot light being targeted to where she seated and Leeteuk is moving closer to her. “What is happening?” She said to her staff besides her. It was never in her plan and she supposed to just sit there and enjoying the concert. But what Leeteuk is doing now?

Without realizing, Leeteuk is already in front of her while holding the last rose from many that he gave to his fans just now. He’s taking Sora’s hand and drags her to the centre of the concert hall. Hesitantly, Sora’s following Leeteuk’s lead.

“Just follow me and do what I tell you to” Sora remembered the promise that she made with him last few weeks ago.

Leeteuk looked at Sora who’s nervous with him kneeling in front of her presenting the last rose in his hand. Sora took the rose but her heart still couldn’t believe what Leeteuk has done. This is beyond her imagination for being in the virtual relationship with a man.

“Sora shi, I have something for you” Leeteuk is taking a white box from his pocket. Sora was taken aback when she saw the white box. She knows what she’s going see to from that box but this is beyond her expectation. Not in front 40,000 of his fans.

“Your hand..” Leeteuk were asking for Sora’s hand for him to put the ring on. Again, she hesitant, but remembering the promise that she had done, she gave in. 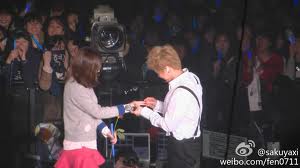 “It’s big isn’t it?” Leeteuk looked at the ring on Sora’s finger. He bought a wrong size.

“A bit..” Sora smiles, not able to talk much as her heart still tremble with what’s happening.

“Then I’ll do this..” Leeteuk came nearer to her and give her a warm hug, trying to ease a bit of her nervousness. He knows it’s not easy to stand in front of 40 thousand people and receive that kind of proposal.

As the light off, Leeteuk’s leading Sora to the backstage. Her hand is as cold as ice. She looked at Leeteuk who still holding her hands while they are walking at the backstage.

“Are you surprised?” Leeteuk looked at her. She nodded not able to say much. It’s not just surprised, she got astonished by it.

“Be careful on your way out, see you later” Leeteuk smiles why leaving Sora with the WGM staff heading outside of the stage. He couldn’t believe he did this, but he made it.

******
Sora is heading to the backstage with the WGM staff still holding tight the rose and the ring that Leeteuk just gave her. She still couldn’t believe what had happened just now while looking at the ring on her finger. She knows Leeteuk been trying to do his best for the show, but it is unfair for her who have less experience in relationship to receive this kind of treatment from Leeteuk.

Her eyes started to fill with tears as she thinks about what has just happened. “This is unfair..” She’s telling herself while making her frail steps back to the concert. She look at the crowd in front of her. The screams when she entered the concert hall sounded like thunders. Her head just went blank. She just wishes everything will just stops here for now.

********
After the performance, straight away Leeteuk went to his exchange room to prepare for his next performance. He smiles when he remembered Sora’s surprised face when he takes out the ring from his pocket. She must be in a lot of shocked, he thought to himself.

“Hyung, what were you doing just now?” Donghae who watched his leader performance just now came by to his exchange room.

“What? My performance?” Leeteuk pretend not to understand his question.

“Was the ring a part of your performance also?”

“It is...” Leeteuk is still focusing on wearing his costume with the help of his stylist. Not to care much of what Donghae’s question is.

“Doing that, in front of many fans, is not a joke hyung..” He said to his hyung, not agreeing to what he had done. He’s trying to put himself in Sora’s shoes. Somehow he could understand how fragile that little girl's heart can be.

“Don’t worry about it.” Leeteuk smiles while sending Donghae away from his changing room. He doesn’t want to talk about it. He knows his event must have left Sora a big impact, but he also knows that he had plan on his mind that will work with it.
Posted by .:: Lacrym0sa ::. at 11:08 PM

You... The one that i can't forget [Completed]

My One Shot Fanfiction