Sora just woke up from her deep sleep. She looks surround her. Its 6am in the morning and she’s in an unfamiliar room. Its a hotel room for sure by looking at the decorations. Then she remembered about Leeteuk. She looks around the room searching for Leeteuk's presence but he's not there.

“He must be in the other room” She touches her head, slight pain felt. Still a bit dizzy. The effect of the accident still there. She wake up from her bed, heading to the other room and found Leeteuk is still sleeping. His face looks soft and fine without any make up. 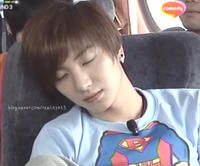 “Why is he so cute.” Sora told herself. Immediately leave the room. Trying to control herself from being immersed with her feelings. Again.


She look out the balcony, enjoying the freshness of the early morning breeze while listening to songs from her ipod. Trying to find some calmness in her soul. Her mind is taking her somewhere else along the songs played in her ears.

Suddenly she felt a hand on her waist. She turned around in shock and suddenly bump into Leeteuk's face.

“What are you doing? I thought you’re sleeping?” Sora looks at Leeteuk direct in the eyes. Their faces is really close.


“Sorry to surprise you. I just woke up.” Leeteuk’s giving her a sweet smile. But then he realized Sora's teary eyes. “Are you crying?” he looked at Sora who's trying to avoid his glance.


"What's wrong? Your head still hurts?" He curious. Sora shakes her head, denying. Leeteuk look at Sora who doesn't want to share the reason behind her teary eyes.

“What are you hearing to?” Leeteuk take one of the earplugs in Sora ears and listen to it. Diverting the topic. “Oh? It’s our song!”


“You know that I compose this song right?” All my heart. That's the song he composed a few years back. Amazed when he got to know that Sora is hearing to their previous album.

“Is it still hurt? Do you need painkiller?” Leeteuk look at Sora’s wound.

“Are you eating painkiller with empty stomach?” Leeteuk’s face suddenly changed. He's serious. Sora looks at him and smile. She loves Leeteuk's concern looks the most. “Let’s order something for breakfast? Or do you wanna go out?”


“Let’s go out shall we Oppa? I wanted to walk around since we’re already here” Leeteuk nodded agreeing to Sora’s suggestion. He's been wanting to spend some private time with her.

“You sure you’re gonna be okay?” Leeteuk’s referring to Sora’s injury.

Hehe.. will try as best as i can, as i need to fight with my working schedule as well :P

Will try to finish one tonight ;)

Thanks a lot for the support!!

You... The one that i can't forget [Completed]

My One Shot Fanfiction